In the spring in 1998, the middle and lower course of Changjiang had unusually got a heavy rainfall. This seasonal rainfall in the whole Changjiang river basin, lasted for almost half a year, and caused the severe flooding in Changjiang from June to August in 1998. It was the severest one since 1954.

The flooding first began in late June. The China Government started to send soldiers to defend the dams and to carry out rescue works. At that time, the summer monsoon suddenly brought a very heavy rainfall to the upper and middle course of Changjiang. The water level of Changjiang's tributaries then rose rapidly and the first high tide was formed. This high tide passed through the Three Gorges Dam on 29th June. Its highest water volume was 37000 m3/second. Luckily, the dam could afford a water volume of 72300 m3/second at maximum, but there were no record of so huge high tides from 1898. The high tide then passed through the middle and lower course from 3rd to 6th of July. Both the record of the highest water level of Jianli (監利) and Jiujiang (九江) had been broken.

Since 2pm on the 30th June, Chongqing Municipality (重慶) had got a huge rainfall. This produced the second high tide. It passed through Wuhan (武漢) safely at 7am on 23rd July, with a water level of 27.75 metres and a water volume of 63600 m3/second. There had a heavy rainfall at the same time and the city has been drowned. The government sent ten thousands of soldiers to protect Wuhan. Later the city got rid of drowning and the high tide moved down away.

After that, the fourth high tide, which was the largest of all the eight high tides, passed through the middle course on 7th and 8th August. The government had decided to explode the Jingjiang dam (荊江大堤) when the water level rose over 45 metres. At 4am on 8th August, Shashi (沙市) recorded a high water level of 44.95 metres, which is even higher than the original dam. At the most dangerous moment in the flooding, the vice-premier at the time, Wenjiabao (溫家寶), came to command the soldiers himself. He decided to save the dam but not to explode it, although the soldiers had prepared for it early before. The fourth high tide finally passed away safely at that night.

Later in the middle and late August, the fifth to the seventh high tide passed through Changjiang safely. The flooding was known as finished in late August, although there was another smaller high tide (the eighth one) in early September, as the need of rescue works reduced and the China government started to rebuild the affected regions. 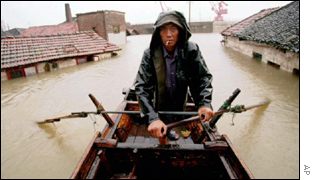 Next page ---> After the flooding

Back to the contents